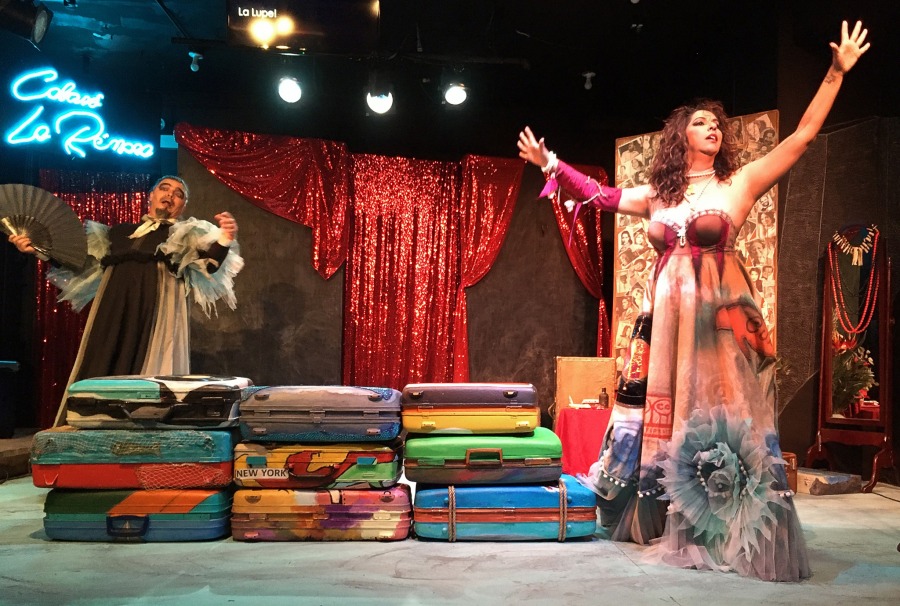 La Gran Tirana: Descarga Dramática (The Great Tyrant) is a play about the life of the legendary Lupe Victoria Yolí Raymond, commonly known as La Lupe. The play was part of the Destinos Chicago International Latino Theater Festival which took place this year from October 14th to November 21st at the Aguijón theater in Chicago. We attended the play on November 19th through a trip organized by Rockford University’s Department of Languages, Philosophy, Religion, and Cultures.

Descarga dramática refers to a dramatic musical output, similar to the improvised jazz sessions created in Havana in the 1950s. This ties in two big parts of La Lupe: dramatic music and her Cuban roots. Before the productions in Aguijón Theater, the play was actually a workshop production in Millenium Park in Chicago, where only the songs of the play were performed until the play itself was written by Rey Andújar and directed by Sándor Menéndez.

The play centers around the life of La Lupe, a Cuban singer who gained popularity after her exile from Cuba in 1962. The singer continued her career in New York where she did not find much success as her performances became chaotic due to rumors of addiction. Interestingly enough, La Lupe has a song titled “La Tirana,” where she talks about her awareness of the rumors people spread about her, possibly clarifying in “La Gran Tirana” the truth about it all.

In the play, the main character Ana Morgana is an immigrant singer like La Lupe. This character is performed by actress Ana Santos-Sánchez. Morgana reflects on the life story of La Lupe as if it were her own, through the works of possession and Santería. Santería has a large base in Cuba, which is largely popular in the Afro-Cuban community. La Lupe was a devout follower of Santería until shortly before her death in 1992, when she became a “born-again Christian.” Many parts of this play reference Santería, including visual props and character portrayals, tying in the relationship between La Lupe and her roots. A common practice in Santería is possession rituals, where those involved are the vessels for the spirits to communicate. Ana, too, is from the Caribbean and is thought to be possessed by La Lupe throughout the majority of the play, which definitely shows in her charismatic and bubbly performance. Throughout the play, Ana is acting as La Lupe, though there is one moment where she reverts back to herself. In theatrical performances, actors often turn off their personal lives to act in character for a performance. This is a similarity between theatrical and musical performances and possession, they all require a duality that is supposed to remain unbroken. This may be a reason for the decline of popularity in La Lupe’s musical career. Rumors of her personal life broke her act on stage, which ended up negatively impacting her performances in the long run.

There are many performances of classic songs, like Guantanamera, among others. The incorporation of Celia Cruz, who gave the song a rise in popularity, along with other classic Caribbean singers and composers, showcased the importance of music in Lupe’s life. The background of the altar featured a wall of famous musical icons as a tribute to their legacy. A big aspect of the altar is the pineapple, which is largely referred to in Cuba as the “queen of tropical fruits,” much like La Lupe was the queen of Latin soul music. Another symbolic element relating back to La Lupe’s Cuban heritage was Ana’s dress which pictured Cuba surrounded by the sea and other additions of La Lupe’s life, like records to represent her musical career. Between the colorful suitcases filled with painted pictures, Cuban props, and the altar with Afro-Cuban Santería figures, the small personal space of the theater turned into an exhibit showcasing important artifacts and mementos representing pieces of her life.

Ana is accompanied on stage by the character Rémora Rotunda (Eternal Remorse), performed by actor and director Sándor Menéndez, who serves as a constant reminder of the trajectory of her life and the life of La Lupe. This character is ghostly but always present either on stage or through the shadows. There are moments spread throughout where both characters experience moments of loud and overwhelming laughter as a way to cope with the reality of the tragic events that they are discussing. The ever-persistent Rémora Rotunda is both a companion and an executioner, always present, but there to remind them of their failures. The characters have dark and gloomy moments due to the constant reminder of Rémora’s presence. The role of this ghostly figure ties into the notion as a line in the play states, “Hope is like a knife to the veins.” For both of the stories that are being told through Ana’s character, the idea of hope is painful to the point that they see hope as another obstacle rather than an opportunity for change. As La Lupe’s life ended on an unfortunate note, hope was lost since her story can be retold but not altered. For Ana, hope could exist but it represented the possibility to mirror La Lupe’s story as she is following a similar path. The living representation of La Lupe is present on stage through many memoirs of her culture and musical history. The suitcases with references to Cuba, the Santería altar, and even the dramatic representation by the characters bring back the exuberance of her performances and her life.

Another important quote mentioned throughout the play is “My life is the obstacle, not the spectacle.” This relates to La Lupe’s feelings of sadness towards the way her life ended up, and her personal life becoming more of a show than her actual performances. She was a star at first, and gradually lost her limelight—her life took a heartbreaking toll on her way out of fame.

There was a lot of emotion in the narration of La Lupe’s life, making it seem like she was really there, taking over Ana’s body. Both characters consume alcohol throughout, possibly as a way to acknowledge addiction rumors and also as an attempt to numb the pain, even though the real La Lupe was said not to consume alcohol due to religious reasons. The characters have a duet in which they engage the crowd and break away from the sadness for a bit. Here, La Lupe’s distinctive singing style is replicated with a heavy Cuban accent featured, even in English songs, adding to the idea that her exile from Cuba followed her to New York which influenced her rejection on Broadway.

Through all of the colorful and dramatic experiences offered by this performance, we both gained insight into the life of La Lupe. The sadness, remorse, and reversal of fortune of such a legendary career were not held back, as it was an important part of the singer’s life. Through this theatrical performance, there was abundant incorporation of Lupe’s Cuban roots, represented by Santería rituals involving possession and well-known Cuban musical numbers to engage the crowd. Her larger-than-life personality was definitely brought out through the main characters in the strong performances by Ana Santos-Sánchez, Sándor Menéndez, and the musicians who joined them on stage. This play serves as an homage to a singer who proved difficulties do not last forever but the remainders of one’s legacy can impact many lives.